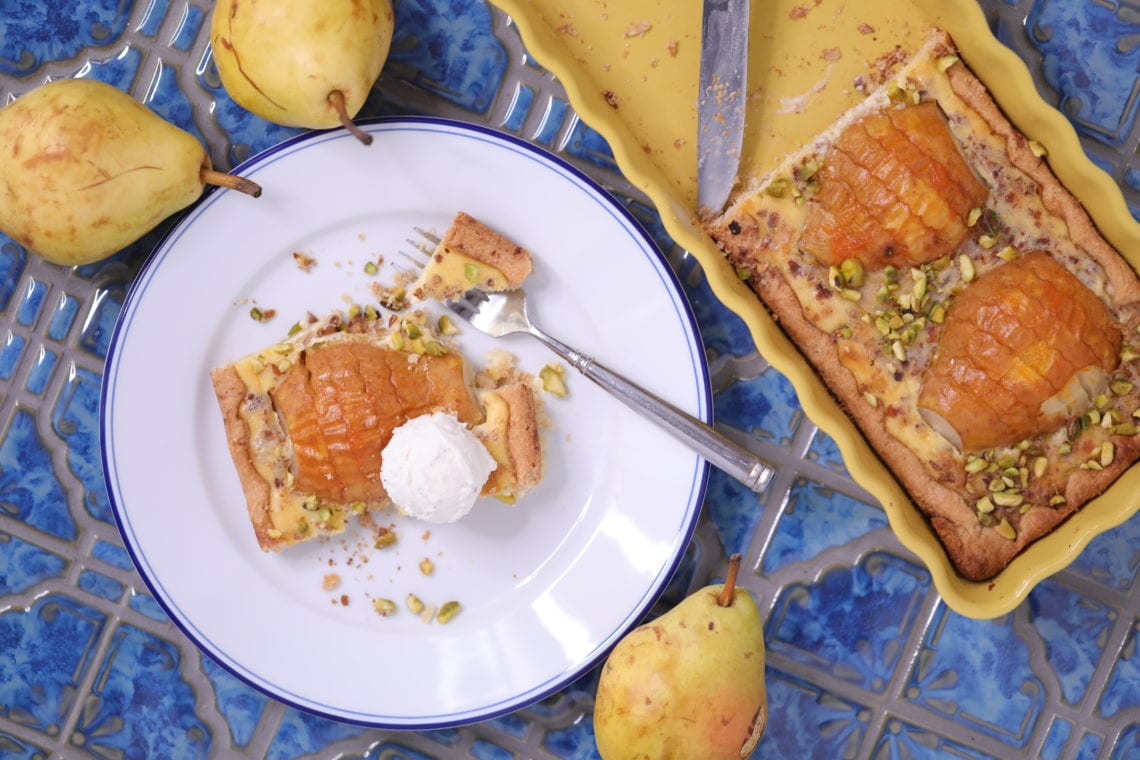 This delectable Pear and Frangipane Tart is gorgeous and so surprisingly simple to make! A layer of almond cream (frangipane) cocoons the pears in a flaky all butter pie crust. The components can be made in advance, so if you have the frangipane made and crust blind baked in advance, the tart is ready in 30 minutes!

This all butter pie crust recipe took about six years of trial and error to perfect! I feel like printing it and putting it in a vault just in case there is an internet crash in 2020 (nothing would surprise me after all we’ve experienced so far this year). If you’ve read my other posts about pies you know they are a joint effort between my husband and me. Pies run deep in Jordan’s family food history and I wanted to honor and integrate part of his family story into our family traditions.

Before I met my husbandI didn’t like pie which was almost a sin in his family. After a few tries of their family pies I quickly jumped on the pie train and was eager to incorporate different flavors and try new methods with the crust. We started baking pies together as newlyweds using his grandmothers Rea’s Crisco Crust Recipe. For now, back to the All Butter method. We’ve tried over 10 different kinds of butter and I 110% testify that you must use Kerrygold brand, or else I can’t stand by this crust. We’ve tried to find the reasoning for it, without boring you with too much science about butter, it just comes down to the fat content vs water content, color, and diet of the cows. What can I say, Ireland cows have got it going on in the butter department.

If you’ve tried making pie crust and failed. I hear you! I’ll try to walk you through it and you will reach pie dough mastery in no time. There is nothing like homemade pie and every home should have the chance to partake of special memories surrounded by the process of hand making a pie.

Here is the ULTIMATE ALL BUTTER CRUST RECIPE with all the tips and tricks. For this tart follow the instructions and blind bake the crust.

You won’t believe how easy it is to make homemade frangipane. It is fabulous in fruit tarts and pastries. It contains 4 ingredients (almonds, butter, sugar, eggs, and natural flavor extracts) and is ready in less than 15 minutes! Frangipane, or almond cream, is a creamy mixture. It is coarser or smoother depending on how it is processed, and it has butter and egg among its ingredients. This is NOT Marzipan that is just almonds and sugar. Frangipane is an almond cream. Marzipan is an almond paste.

The name goes back to 17th century France and is named after an Italian nobleman named, Frangipani.
He was living in France and invented a scent made from almonds that bakers of that time used to flavor when they invented this almond cream.

This recipe uses the common Bartlett or Williams pears. Simple, delicious and found all year around in most grocery stores. They are  juicy and perfect for this recipe. You can also use any type you like the most for baking or already have on hand.

I leave the skin on and cut them with a zigzag shaped pastry cutter (see pattern on pears- you can also use a regular knife). I love how the skin turns golden and also adds another texture to the tart. If you prefer them peeled you may do that as well.

Assembling and Baking the Tart

My dream is to share delicious wholesome recipes that you will share around the table with all your loved ones. The memories surrounded by food are the heart and soul of CucinaByElena.

Are you ready for this? NO COOK roasted red pepper

Comfort food vibes with this easy, cheesy, and cre

Game day Italian Style Nachos! What team are you c